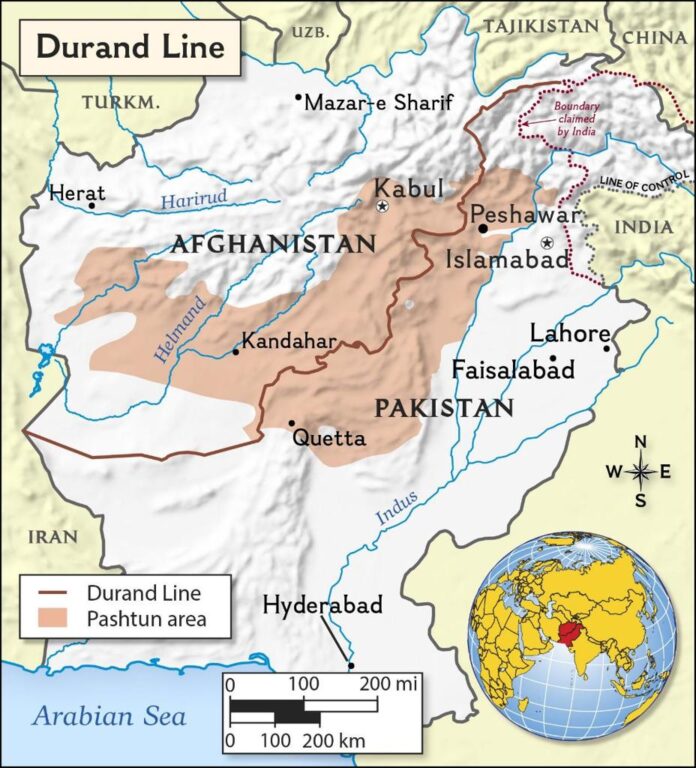 Pakistan’s repeated failure to prevail upon Afghanistan on border issues reveals the fallacy of Durand Line. The two countries have been on odds on the matter since emergence of Pakistan in 1947. The main dispute emanates from the fact that the line divides traditional Pashtun areas in Afghanistan and Pakistan. The border has long been restive as the Pashtun tribal groups feel the Durand line left them with a fractured identity despite having a common culture and ethnicity. They call it an arbitrary action ignoring geography, history and culture of the region. The disputed border line revered by Pakistan was established in 1893 under an agreement forced upon the then Afghan King by the British rulers of undivided India. The anguish has made subsequent Afghan regimes declaring invalid the Durand Line agreement as well as various Anglo-Afghan treaties upholding it.

Ignoring concerns of tribals who feel humiliated by violation of their local rights, Pakistan army is bent upon fencing the Durand Line as early as possible. The pretext is to prevent illegal cross- border movement and containing terrorist organizations, particularly, the Tehreek-e-Taliban Pakistan (TTP). However, the main reason of Pakistan’s aggressive pursuance is to weaken the Pashtun solidarity in view of the growing nationalism among them. Besides, it would assist Islamabad in ensuring security of the China Pakistan Economic Corridor project. But, the fencing will have far reaching implications for otherwise a closely knit Pashtun and Balochi tribal communities living on both sides of the border, including their agricultural land, traditional border trade and movement of labour / other resources.

The proposed fence, along the 2640 KM Durand Line is planned to be supported by over 400 outposts and a similar number of check posts. The fencing work which started in 2016, continued unhindered till Taliban’s takeover of Kabul in 2021 after which the euphoria of having affected a favourable regime change in Afghanistan evaporated. However, by that time Pakistan was able to complete 90 per cent of the work. The last few months have seen disagreements over demarcation of the border and Taliban’s support to the TTP, raising tensions and clashes along the Durand Line. The brunt is faced by tribals living in hilly areas on both sides of the border who have been the target of constant attacks by Pakistan’s army and Air Force.

The current year has witnessed several instances of illegal bombardment by the Pakistani forces mainly in Khost and Kunar provinces resulting into casualties and financial losses on the Afghan side. In the current year till May 1st, 2022, there have been around 40 clashes along the Durand Line most of which pertain to the border dispute. More than 40 people died when rockets were fired from Pakistan Air Force (PAF) helicopters in Kunar, Khost, Paktika and other bordering provinces on April 16, 2022. The situation continues to be tense as on 30 Apr 2022, all type of leaves of Pakistani troops deployed along the border were cancelled due to the ongoing dispute. The situation has come to such a pass that that the Pakistani ambassador was summoned to the foreign ministry in Kabul and was issued a stern warning. The sequence of events suggests that a major confrontation with Afghan Taliban, which Pakistan desperately wants to avoid, may just be round the corner.

In Pakistan, most of the problems precipitating cross border threats in the Af-Pak region are created from within by flawed state policies. Pakistan’s politics has been plagued by failures in establishing an equitable and honourable existence for its ethnically divided population. Ethnic consciousness of Pashtuns and Balochis in Kyber Pakhtunkhwa and Baluchistan is essentially arising out of this sense of alienation and deprivation. As a consequence, border areas have experienced tribal insurgencies, ethnic and sectarian struggles and secessionist movements by Balochis and Pashtuns.

Right from the time it started to be used as the conduit for the flow of weapons and the Jihadi fervour into Afghanistan against the Soviets, Pakistan has emerged as the primary bastion of Jihad. It always considered Taliban an important enabler of its twin objective of creating disturbance in neighbourhood while portraying Pakistan as a fighter in the war against terrorism. But the manner in which the Taliban government has taken divergent position, especially in matters related to the Af-Pak border and terror groups has deeply exasperated the Pakistani establishment since it actually believed that the Afghan Taliban will toe its line.

Pakistan’s contention that the Af-Pak border is plagued with cross border movement of terror groups, infiltration, illegal immigration, smuggling and drug trafficking may be valid to some extent. Nonetheless, the situation is of Pakistan’s government and Army’s own making. Pakistan has used the same border for continuous meddling in Afghanistan’s internal affairs and has nurtured terror groups for their own political ends. Incidentally, Pakistan’s deep state is known to be involved in the largest state sponsored drug peddling operations along the Af-Pak border and have emerged as the prime exponent of the narco-terror nexus.

The Af-Pak border fence is restricting the movement leading to resentment amongst the tribes who have made unhindered cross border movement for centuries. With families divided and livelihood becoming a suspect, the situation is likely to cause resentment among people from both sides of border.

Fostering tolerance and trust can save Afghanistan