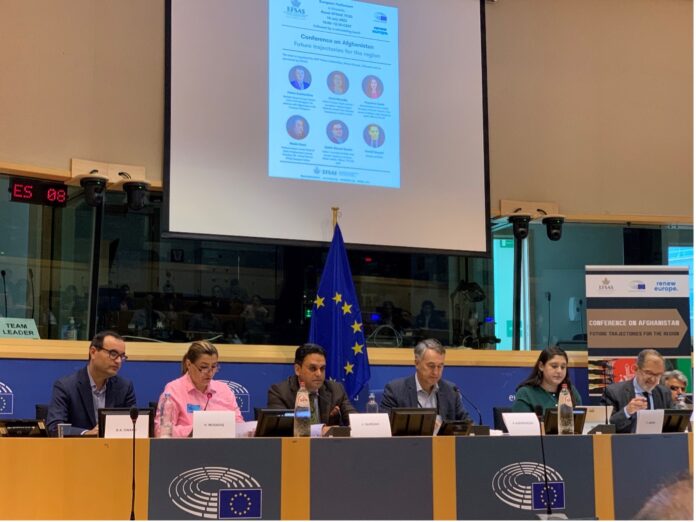 “I think we are not speaking enough about Pakistan” says EU Ambassador to Afghanistan during EFSAS Conference in EU Parliament:

3.         The presentations highlighted the human rights violations happening in Afghanistan, including the systematic persecution of journalists and critics, the forced displacement of entire communities, as well as the wide-spread extra-judicial killings and forced disappearances.

4.         The panelists also elaborated the terror landscape in the region since the Taliban takeover. Highlighting Taliban’s terror connections throughout the region including that of with Uzbek terrorist organization Ansarullah, Al-Qaeda and the Pakistani Taliban (TTP) and also with the Islamic State – Khorasan Province (ISKP), a group that is often presented as the Taliban’s most prolific enemy but which, in reality, at times collaborates with the Taliban, it was pointed out that these terror groups function as blackmailing chips for the Taliban. By presenting themselves as the only regional force with some degree of control over them, Taliban have successfully compelled powerful neighbors including Russia, India and China to initiate some sort of engagement with the Taliban.

5.         In this context, it was pointed out that Pakistan Army is the other entity which is to gain from this terror connections of Taliban. Besides using these for waging proxy war against regional neighbours, it also increases the influence of Pakistan Army and its’ indispensability in the international arena. This is evident from the fact that despite the economic crisis in Pakistan, the budget for Pakistan Army keeps increasing every year. Also, every time when an international delegation including that from Europe goes to Pakistan, they always make it a point to meet the Pakistan Army Chief and other Generals. This sends a signal to the democratic forces in Pakistan that they are not important. On the other hand, if a European delegation chooses not to meet the Army Chief while on an official visit, it will give a clear message to the Army that Europe does not want to deal with Pakistani Army and would like to engage with democratic forces in Pakistan.

6.         Western officials have been rolling their eyes on the words of Afghans about Pakistan’s duplicity and brutal intrusion into their country, Ms. Assad said. She felt that Western officials, particularly those of the UK, which is the biggest donor of aid to Pakistan, were purposefully avoiding any conversation on Pakistan’s culpability in Afghanistan. Oftentimes the argument on behalf of Western States for not sanctioning Pakistan is that the country is a nuclear State, yet we are now all looking at the West sanctioning Russia for its invasion of Ukraine, Ms. Assad said, while pointing out that this hypocrisy in policy needs to be corrected. Simultaneously, Ms. Assad added, the Pakistani civilian population suffers as a result of the West’s decision to back the military regime in Pakistan.

7.         Talking about the role of NATO, the EU, UN and generally the Western powers, the panelist explained that Afghanistan is still seen through the prism of 18th century regional and colonial aspirations, being experimented on by former colonial powers. It was highlighted that while foreign interventions are complex, one needs to listen to the people, yet, Afghans have not been listened to and their opinions have not been included in policy decisions that have come out. The views of the Afghan people not being taken into consideration by the US when it put people in power in Kabul after 2001 was cited as an example.

8.         The EU Ambassador to Afghanistan, Mr. Andreas von Brandt, commented on the different presentations made and laid down the EU’s perspective on the issues raised. He argued that the EU indeed did not grasp the gravity and depth of the problem immediately after the fall of Afghanistan to Taliban in August 2021. Yet, while Mr. von Brandt acknowledged that many mistakes have been made by the West in the past 20 years, he said that it is important to look at the present and acknowledge the many successes, especially in the fields of health, sanitation, media, budgeting and finance.

9.         He further pinpointed the lack of a unified Afghan “voice” that has solid ideas and propositions, and which provides alternatives to the West to act. Regarding the case of Pakistan, Ambassador von Brandt said that, “What was said about Pakistan is also very important and I think we are not speaking enough about Pakistan. That is probably all I can say, but I agree with that”. Mr. von Brandt explicitly emphasized that the EU and the UN are not sending any money to the Taliban, and they are exploring alternative channels to provide humanitarian aid to the people. While fraud may still exist, as of now the EU is delivering food and other assistance to 19 million Afghans, and this has helped avoid the worst hunger, von Brandt stated.

10.       Ambassador von Brandt further argued that the criticism directed at the international community is very contradictory – on one hand there are allegations that not enough financial assistance is being provided, while on the other there are comments regarding neo-colonialism and foreign intervention. While there might be truth in both contentions, he said, this mix of opinions makes it very difficult to come up with an appropriate response. However, as of now, the consensus of the international community is that the Taliban will not be granted political recognition.

11.       Ambassador von Brandt closed his statement by saying that although some have called for more time, there is no scope for patience when faced with famine and a humanitarian disaster, and the international community must act swiftly.

12.       Finally, MEP Petras Auštrevičius took the floor and expressed his thoughts. He conveyed his concern at the growing terrorism in the region and the fact that terrorist groups have become emboldened. The affiliations with the Taliban created by them carry the potential of having devastating consequences for the region. Regarding Pakistan, the MEP stated that the EU has granted GSP+ status to Pakistan, which is very important for Pakistan and its interests as it is a major boost to its economy. He added that safeguarding Human Rights is also a major element of GSP+ status, and the EU will keep checking Pakistan in this regard. There will be no stepping away from this policy. He elaborated that the Human Rights Committee of the European Parliament plans to visit Pakistan later this year, and he had no doubt that a strong signal on Human Rights will again be sent to the Government of Pakistan. Auštrevičius added, “On the Pakistani Military I can’t comment more than what was already said. I hope that those concerns which have been expressed do not constitute a strategic threat for our cooperation. Here dialogue is not an easy one”.

13.       The MEP argued that criticism needs to be accompanied by constructive proposals, and he urged the audience to consolidate their opinions in structured recommendations. He added that while there is a need for a long-term vision, it is better to base action on short-term considerations as of now. For a long time, the EU has been the largest donor to Afghanistan, and the need now is to establish a concrete action plan for the next 5 or 10 years, made and owned by Afghans, in order to convince the European Parliament to continue with its support, Mr. Petras Auštrevičius concluded.